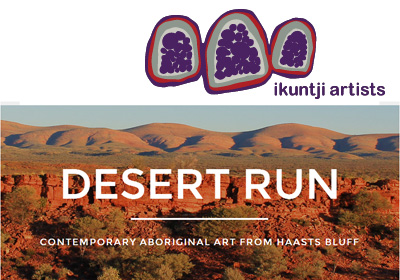 Ikuntji is situated within the spectacular West MacDonnell Ranges. The community is surrounded on the northern side be Ulumparu, known as Mount Edward, and Anyali, know as Mount William, and in the south by the stunning Mereenie Bluff. To the west red sand hills and stands of desert oak trees, known locally as kurrkara watiya, dominate the landscape. The mountains change their colours depending on the light of the day and the rain; some highlights at dusk and dawn may only last a few seconds.

Ikuntji Artists was first established in 1992, after a series of workshops with Melbourne artist Marina Strocchi, and under the influence of the then community president, the late Esther Jugadai. The art centre was initially set up to fulfil the role of women’s centre providing services such as catering for old people and children in the community. After first experiences made in printing T-shirts, the artists began producing acrylic paintings on linen and handmade paper, which quickly gained the attention of the Australian and international art world as well as earning the centre an impressive reputation for fine art. The focus changed from a women’s centre to an art centre in 2005 with the incorporation of the art centre as Ikuntji Artists Aboriginal Corporation.

The artists draw their inspiration from their personal ngurra (country) and Tjukurrpa (Dreaming). They interpret the ancestral stories by using traditional symbols, icons and motifs. The artistic repertoire of Ikuntji Artists is diverse and includes for example: naive as well as highly abstract paintings told by each artist in their personal signature style. Throughout the 21 years of its existence the art movement in Ikuntji has flourished and constantly left its mark in the fine art world. At the same time the art centre has been the cultural hub of the community, maintaining, reinforcing and reinvigorating cultural practices through art-making.

Today Ikuntji Artists has eight key artists, who exhibit in Australia and internationally. They are represented in major collections across the globe.