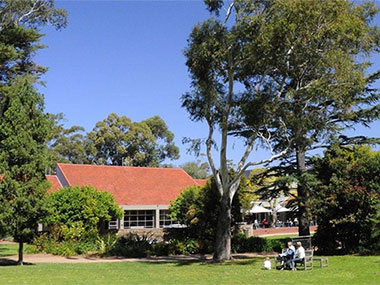 Ben and Hazel Broadhurst secured the land that became Hazelhurst in 1945. Situated in Gymea. the Gweagal name for the beautiful native lily that populates the area, the land was a natural bushland setting with Dent’s Creek running through it. The Broadhursts’ two-storey cottage, designed with the help of local architect Harry Smith, is now Hazelhurst’s artist-in-residence and digital media studio.

The Broadhursts loved gardening and practised recycling and organic farming. They kept goats, horses, a cow and 200 chooks. They also had a mini dairy making cheeses and butter and an orchard of pears, peaches, apples and strawberries. Apart from their farming interests, the Broadhursts were successful business people, managing a shirt-making factory in Rockdale for more than 40 years. On retiring, Ben and Hazel gave their time to charities and worthy causes and became more involved with their interests in spiritualism. They had a fascination with numerology, astrology, extra-sensory perception and other psychic phenomena. Ben was president of the Sydney Centre for Psychic Research for some time in the 1950s.

The Broadhursts were generous, community-minded people. In keeping with their values, they bequeathed their estate to the Sutherland Shire.