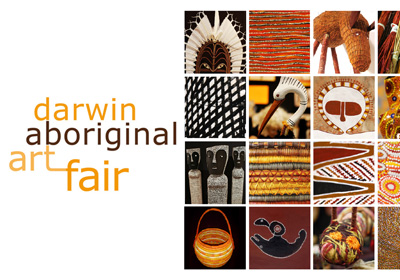 The Darwin Aboriginal Art Fair is an exhibition that represents over 50 community Arts Centres from across Australia.

The inaugural Darwin Aboriginal Art Fair event was held in 2007, and was originally founded by Apolline Kohen, the then Chair of the MAGNT Foundation Board and the Director of Maningrida Art and Culture (MAC), and was managed by Claire Summers (also from MAC) in its first two years of operation.

The Darwin Aboriginal Art Fair Foundation Ltd was founded in 2012 by a dedicated steering committee which was led by Interim Chair, Cathy Cummins from Waringarri Aboriginal Arts and Franchesca Cubillo (Senior Curator for Aboriginal and Torres Strait Island Art at the National Gallery of Australia) was elected as the first Chair of the board.

The 9th Darwin Aboriginal Art Fair will be held from 7-9 August 2015 at the Darwin Convention Centre.

This event coincides with the Telstra National Aboriginal and Torres Strait Islander Art Awards, the National Indigenous Music Awards and the Darwin Festival.